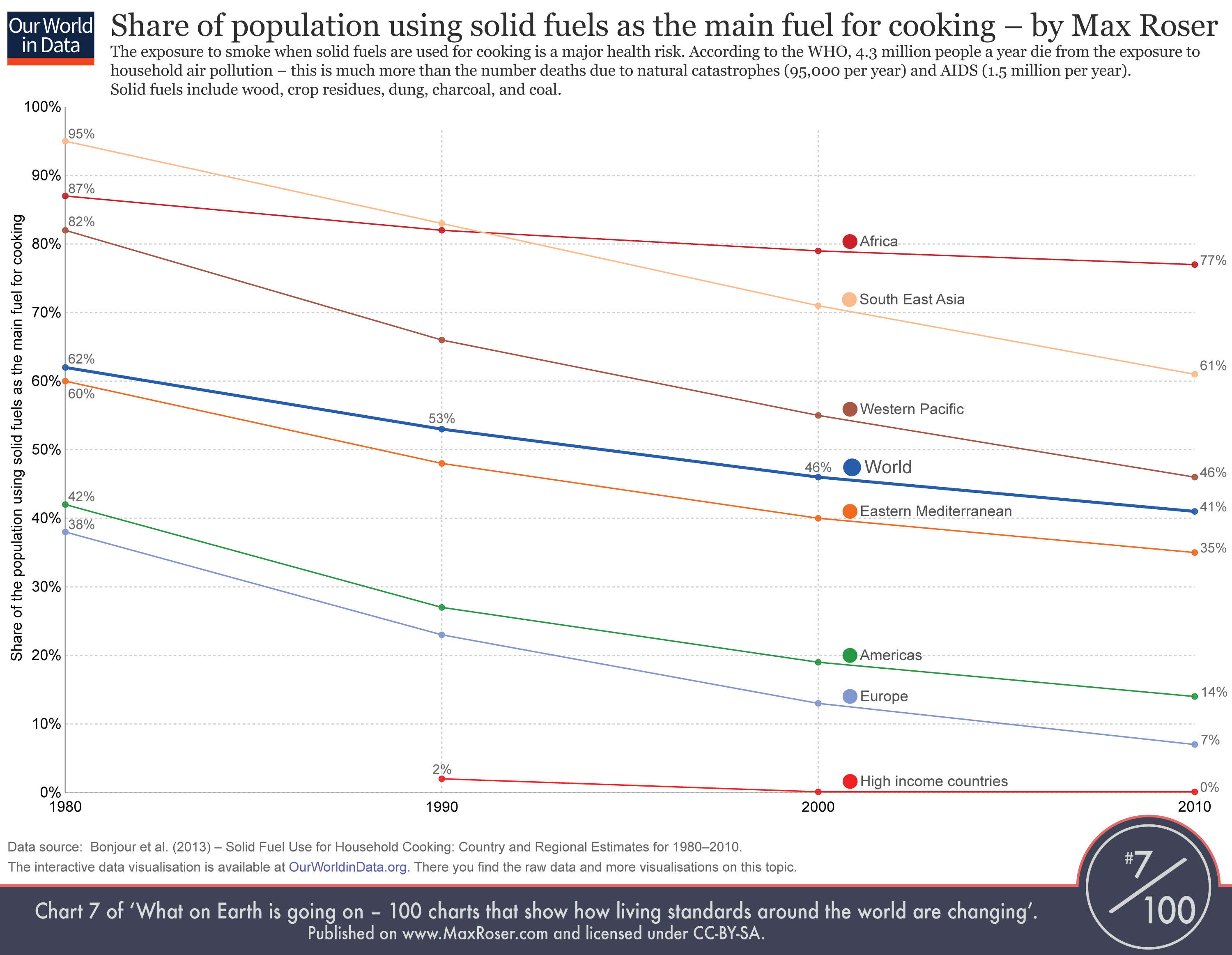 Indoor air pollution is by far the biggest environmental problem of the world. Every year, 4.3 million people die due to the exposure to household air pollution caused by indoor open fire. To bring this in perspective: This is 45-times the number of the global annual deaths from natural catastrophes (±95,000 in the 2010s). And much more than twice the number of people dying because of AIDS (1.5 million in 2013). It is probably the most unreported of the world’s big problems.

The burning of solid fuels fills the houses and huts in poorer countries with thick smoke that kills the world’s poor by causing pneumonia, stroke, heart disease, chronic obstructive pulmonary disease, and lung cancer. It is predominantly women and young children who are killed by indoor air pollution.

The solid fuels responsible for this include wood, crop residues, dung, charcoal, and coal.

The solution for this problem is straightforward: shift from solid fuels to modern energy sources. And the chart shows that we are making rapid progress in this direction. In 1980 almost two thirds of the world’s population used solid fuels for their cooking. 30 years later this is down to 41%. The chart also shows that it is a problem associated with poverty: In richer Europe and North America the share is much lower than in the rest of the world; and in the high income countries of the world the use of solid fuels is entirely a thing of the past.

The use of solid fuels is going down in all of the world’s regions. But the success rapidly developing South East Asia is particularly impressive: Here the share fell from 95% to 61%.

This is part of my 100 chart project.

These data are taken from Bonjour et al. (2013) – Solid Fuel Use for Household Cooking: Country and Regional Estimates for 1980–2010. Environ Health Perspect; DOI:10.1289/ehp.1205987. Online here. The data  (by country) is available in the supplemental material document which is online here.

Countries are grouped by WHO region and income category (WHO 2012e; see Supplemental Material, Table S2).

You find this chart and much more information about this topic in the data entry on indoor air pollution.