Instead of publishing posts here I now publish all my writings on the open-access publication OurWorldInData.org.

I haven’t written much on this blog recently and so I thought it might make sense to just list – and link to – a couple of the projects that I’ve been working on during the last year. This way there are at least some things to read or watch for those who come to this page.

Our World in Data:

What kept me busy mostly was the work on Our World in Data, the free online publication on global development that I started some years ago.

Unfortunately quite a lot of time I spent on the search for funding. But there were also a lot of very positive developments!

My publications in the last year:

In addition to OWID I work as a researcher at the University of Oxford. These are the abstracts of the three papers I published in the last year:

Abstract: The large span of long-run projected temperature changes in climate projections does not predominately originate from uncertainty across climate models; instead it is the wide range of different global socio-economic scenarios and the implied energy production that results in high uncertainty about climate change. It is therefore important to assess the observational tracking of these scenarios. For the first time observations over two decades are available against which the initial sets of socio-economic scenarios used in IPCC reports can be assessed. Here we compare these socio-economic scenarios created in both 1992 and 2000 against the recent observational record to investigate the coupling of economic growth and fossil-fuel CO2 emissions. We find that the growth rate in fossil fuel CO2 emission intensity – fossil fuel CO2 emissions per GDP – over the 2000s exceeds the projections of all main emission scenarios. Proposing a method to disaggregate differences in global growth rates to country-by-country contributions, we find that the relative discrepancy is driven by high growth rates in Asia and Eastern Europe, in particular in Russia and China. The growth of emission intensity over the 2000s highlights the relevance of unforeseen local shifts in projections on a global scale.

Abstract: Major donors heavily rely on GNI per capita to allocate development assistance for health (DAH). This paper questions this paradigm by analyzing the determinants of health outcomes using cross-sectional data from 99 countries in 2012. We use disability-adjusted life years (Group I) per capita as our main indicator for health outcomes. We consider four primary variables: GNI per capita, institutional capacity, individual poverty and the epidemiological surroundings. We construct a health poverty line of 10·89 international-$ per day, which measures the minimum level of income an individual needs to have access to basic healthcare. We take the contagious nature of communicable diseases into account, by estimating the extent to which the population health in neighboring countries (the epidemiological surroundings) affects health outcomes. We apply a spatial two-stage least-squares model to mitigate the risks of reverse causality, and use additional IV estimations as sensitivity tests. Overall we find that GNI is not a significant predictor of health outcomes once other factors are controlled for.

Nolan, B., Roser, M., Thewissen, S. (2017) – GDP per capita versus median household income: What gives rise to divergence over time? In Review of Income and Wealth – forthcoming.

We published a summary of this paper here: Stagnating median incomes despite economic growth: Explaining the divergence in 27 OECD countries

Abstract: Divergence between the evolution of GDP per capita and the income of a “typical” household as measured in household surveys is giving rise to a range of serious concerns, especially in the USA. This paper investigates the extent of that divergence and the factors that contribute to it across 27 OECD countries, using data from OECD National Accounts and the Luxembourg Income Study. While GDP per capita has risen faster than median household income in most of these countries over the period these data cover, the size of that divergence varied very substantially, with the USA a clear outlier. The paper distinguishes a number of factors contributing to such a divergence, and finds wide variation across countries in the impact of the various factors. Further, both the extent of that divergence and the role of the various contributory factors vary widely over time for most of the countries studied. These findings have serious implications for the monitoring and assessment of changes in household incomes and living standards over time.

Together with Sir Tony Atkinson, Joe Hasell, and Salvatore Morelli, I published the new version of the Chartbook of Economic Inequality. The Chartbook aims to bring together the data on several dimensions of inequality for 25 countries over the period since 1900. Version 1 of this was published in 2014. And in May this year we published a major revision of this work.

And I published these two shorter articles in the last year:

Collaborations in the last year:

With the great team of Kurz Gesagt I collaborated to make a short video that explains how rapid population happened – and why it will come to an end:

And in another video we told the history of the decline of maternal mortality:

The very saddest changes in the last year were the deaths of Sir Tony Atkinson and Hans Rosling.

Tony died on the first day of this year. He brought me to Oxford, he helped to develop the ideas I am now working on, and he was just the kindest, smartest, and most generous mentor one could wish for. That was not only true for me, at his website I collected a long list of obituaries that speak for themselves.

Hans died only five weeks later than Tony. I definitely would not do what I am doing today if Hans had not done what he did. He had a massive impact on what I care about and what I spend my days working on. Personally he was exactly the same enthusiastic, witty, and clear-thinking man that he was on stage in his famous talks. For the British Medical Journal I wrote an obituary for him: ‘Seeing human lives in spreadsheets’ – Hans Rosling (1948–2017)

I miss both of them.

I’m part of the team that is building the web publication Our World In Data that presents the empirical evidence on global development.

We present this evidence topic by topic – war, democracy, child mortality, higher education, corruption and so on. One reason why I wanted all of these different aspects in one publication is that they are all related: better education for women leads to lower child mortality for example.

These cross-connections are really at the heart of development: from education to democracy, from democracy to war, from war to public debt, from public debt to spending to education etc. etc.

But an ideal system for such a publication might be to write that section X which discusses the link between A and B and then this same section X is shown in both entries, entry A and entry B. These modules would be reusable blocks – we write them once and use them several times. In computer science this is referred to as transclusion.

The idea for a ‘modular structure’, as I put in the title, would be to write these bits in modules:

and then these modules are shown in the appropriate entries. Our current structure would work well since one module could always be headline-text-visualisation.

– This structure would us also help to possibly solve a second problem, namely that our entries get very long and they are becoming hard to navigate. A structure that breaks them in pieces in a good way might be helpful.

– It would then be straightforward to recombine modules to other ‘articles’. Every module that is tagged ‘USA’, or ‘long-term perspective’, or ‘public good finance’ etc.

My main questions is has anyone seen some structure for a web publication like this on WordPress? Are there helpful examples that we could look at?

ADDED ON 20 FEB: In response to the request above I’ve received several very helpful emails. Many thanks for this!

One pointed to this WordPress plugin https://wordpress.org/plugins/insert-pages/ which seems to do what I had in mind. But I haven’t tried that plugin myself yet.

On Our World in Data I have just published a history of living conditions.

The summarizing visualisation of that text shows how the world has changed over the last two centuries: 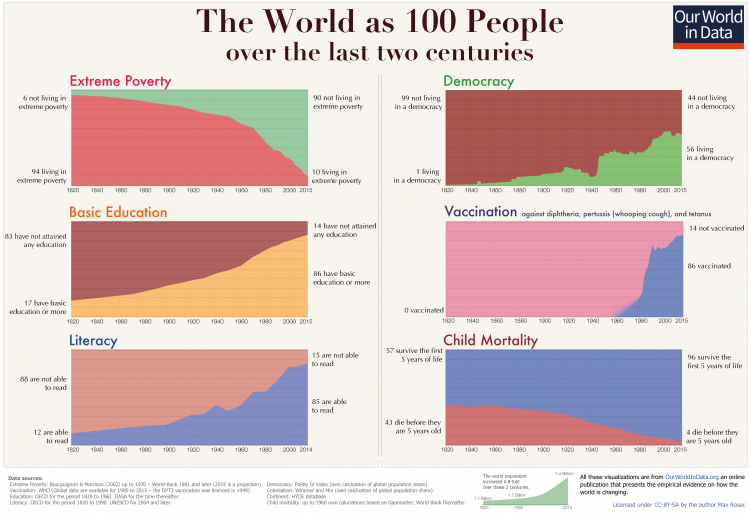 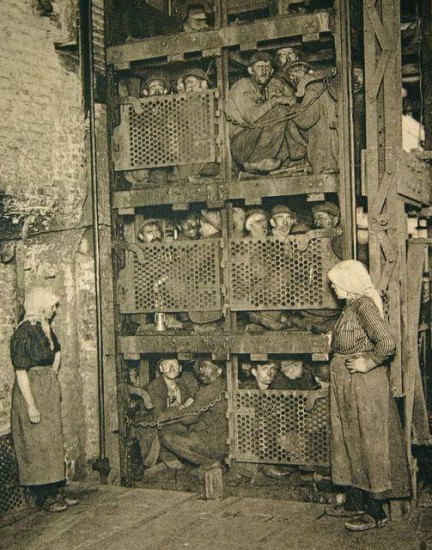 The source of this image and the background story is here (in Italian).

Average working hours in Belgium back then were 64 per week.